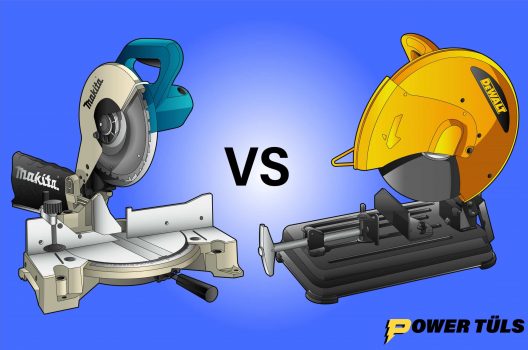 Chop Saw vs Miter Saw: Which One to Buy?

One of the most common tools you’ll find on a job site or in a workshop is a saw.  Power saws come in all shapes and sizes, having evolved and developed extremely far beyond their origins as handheld tools.

Among the different saws available for woodworkers and contractors are chop saws and miter saws, both similar in form but different in their functions.  They can be somewhat difficult to distinguish between, because of their similar form, but they should not be confused because they each offer unique benefits.

When it comes to picking out power tools, you’ll eventually run across the question, “What’s the best choice in between a chop saw vs miter saw?” They are both extremely common tools, and they’re both very useful, but it’s important to know their differences and how they’ll fit in with your intended functions.

This way, you can make an informed decision and purchase the right product.

Everything About Chop Saws

Chop Saws, priorly known as abrasive saws, are an extremely common tool, and you’ll most likely see them on job sites where workers are building houses and putting up framing, because they are perfect for straight cuts through thick wood.  For your own personal use, a chop saw can make a great impact, especially if you need to work with heavier, thicker pieces of wood and are planning on using more simple cuts.

Here is a video of a chop saw in use.

When Should a Chop Saw Be Used

The key to understanding a chop saw comes with its name.  It is able to “chop” a piece of wood very quickly and precisely.  We’ll get into the differences in a bit more detail when we discuss miter saws, but a chop saw is only able to make straight-line, 90 degree angle cuts.

Therefore, a chop saw is a great tool for working with straight pieces and right angles. For instance, in construction or simple furniture design, right angles are perfectly acceptable and appropriate since the final product will likely be covered with drywall or upholstery of some kind. 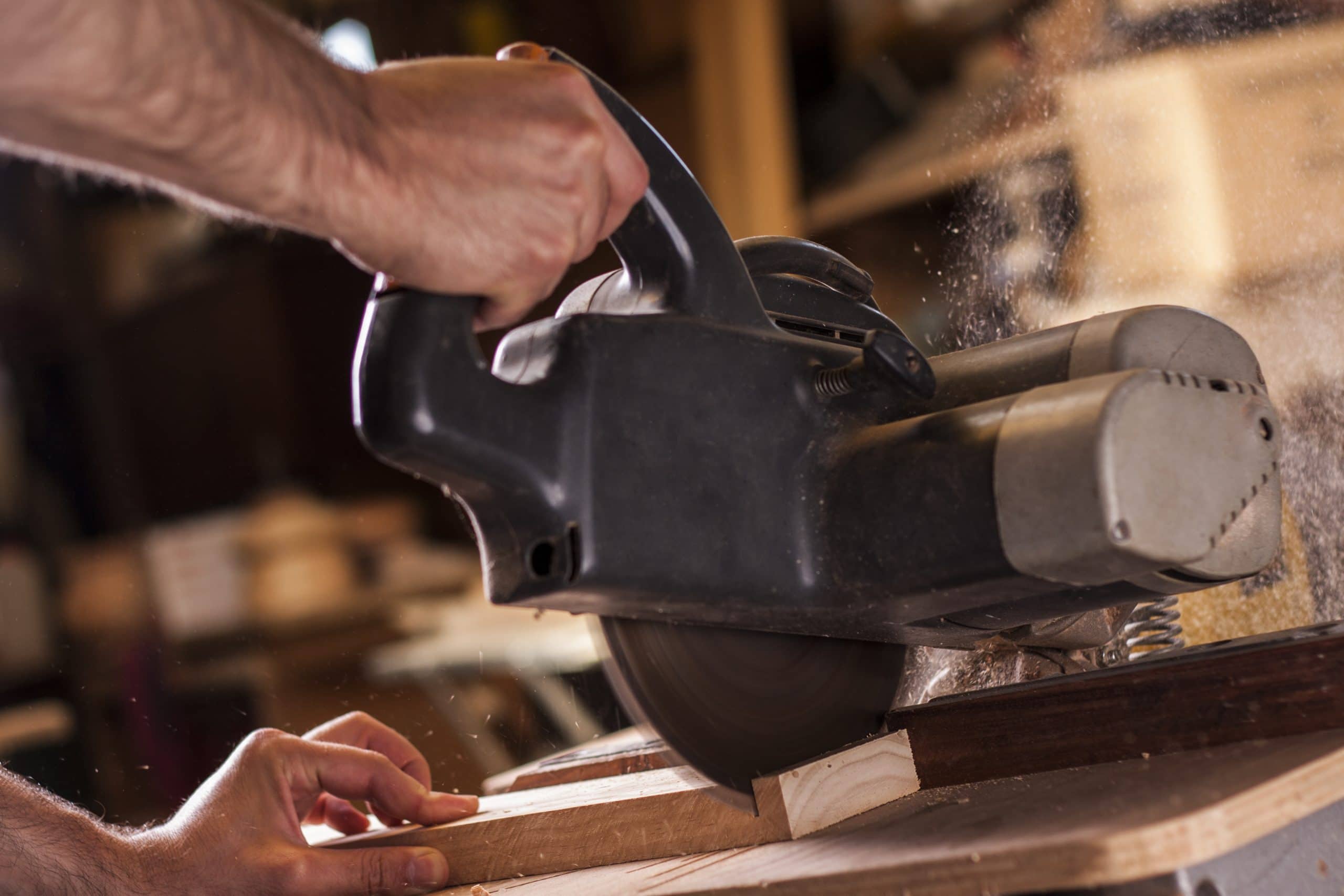 A chop saw is a durable and strong product.  What it sacrifices in versatility compared to the miter saw, it picks up in size and strength, making it a very useful option when working with thick wood and large pieces that need chopping.

A chop saw is for simple cuts, but that doesn’t mean it is relegated to low-level work. In fact, a quality chop saw is one of the main pieces in a lot of woodworkers and contractors tool chests, because it allows them to cut through such large pieces with precision and without extra damage to the wood.

How to Use a Chop Saw

A chop saw is very simple to use, making it one of the quickest to pick up and learn, and also very useful on job sites.  Because of its simplicity, this product can be used by beginners relatively easily and it always guarantees quality cuts with precise angles.  There is no guesswork with a chop saw, making it extremely practical and useful.

The main method of use is by placing a piece of wood on the cutting surface connected to the chop saw.  Many chop saws come with a ruler on the surface so you can measure without having to bring any extra tools and you can ensure proper cutting placement.

Once you place the piece of wood on the surface, you may want to clamp it in place, but as you get more experienced with the chop saw, you’ll probably skip that step, especially for smaller pieces of wood.

Ensuring you take proper safety precautions, you can turn on the saw and use the handle to lower the blade through the wood, making a smooth, precise cut.

If you did it well and the wood didn’t move during the process, it should be an extremely smooth cut without excess kerf and no burning.

Benefits, Features, and Safety of a Chop Saw

First, a chop saw is more powerful since it is strictly used for 90 degree cuts.  Additionally, they are typically capable of cutting through wider pieces of wood. These make chop saws more useful for large projects, and smoother for 90 degree cuts.

Chop saws come with numerous safety features, as many saws do now.  Typically saws like this will have a guard that comes down to prevent someone from accidentally getting their fingers in the machine.

Additionally, there are quick cut off switches that make them easy to turn off in a pinch. Some of the more advanced models can even detect if someone has put their finger too close to the blade and will automatically stop.

Be sure to have sufficient chop saw training before any solo operation.

Everything About Miter Saws

Miter saws are a different creature altogether when compared to chop saws.

A chop saw is designed strictly for straight cuts, but a miter saw is intended for all sorts of angles.  Most miter saws are designed to swivel around two axes to give complex mitered joints. These are more dynamic saws that can give you a variety of cuts, but it obviously sacrifices power and depth at the same time, which can be detrimental to performance in some projects.

Here is a video of a miter saw in use.

When Should a Miter Saw Be Used

A miter saw can be used in the same settings that a chop saw was used, but it has the additional benefit of the mitering, which allows you to use it in much more complex scenarios.  A miter saw is particularly useful for a complicated woodworking or furniture project, like an adirondack chair or farmhouse table.

The complexity of cuts means you can create a cut that is angled in multiple dimensions, meaning it tapers while also being slanted at an angle.  This complexity is particularly useful for intricate joinery, which is less common when you’re working with simple designs or with construction.

Therefore, miter saws are much more suited for detailed woodworking as opposed to general labor or handyman work. 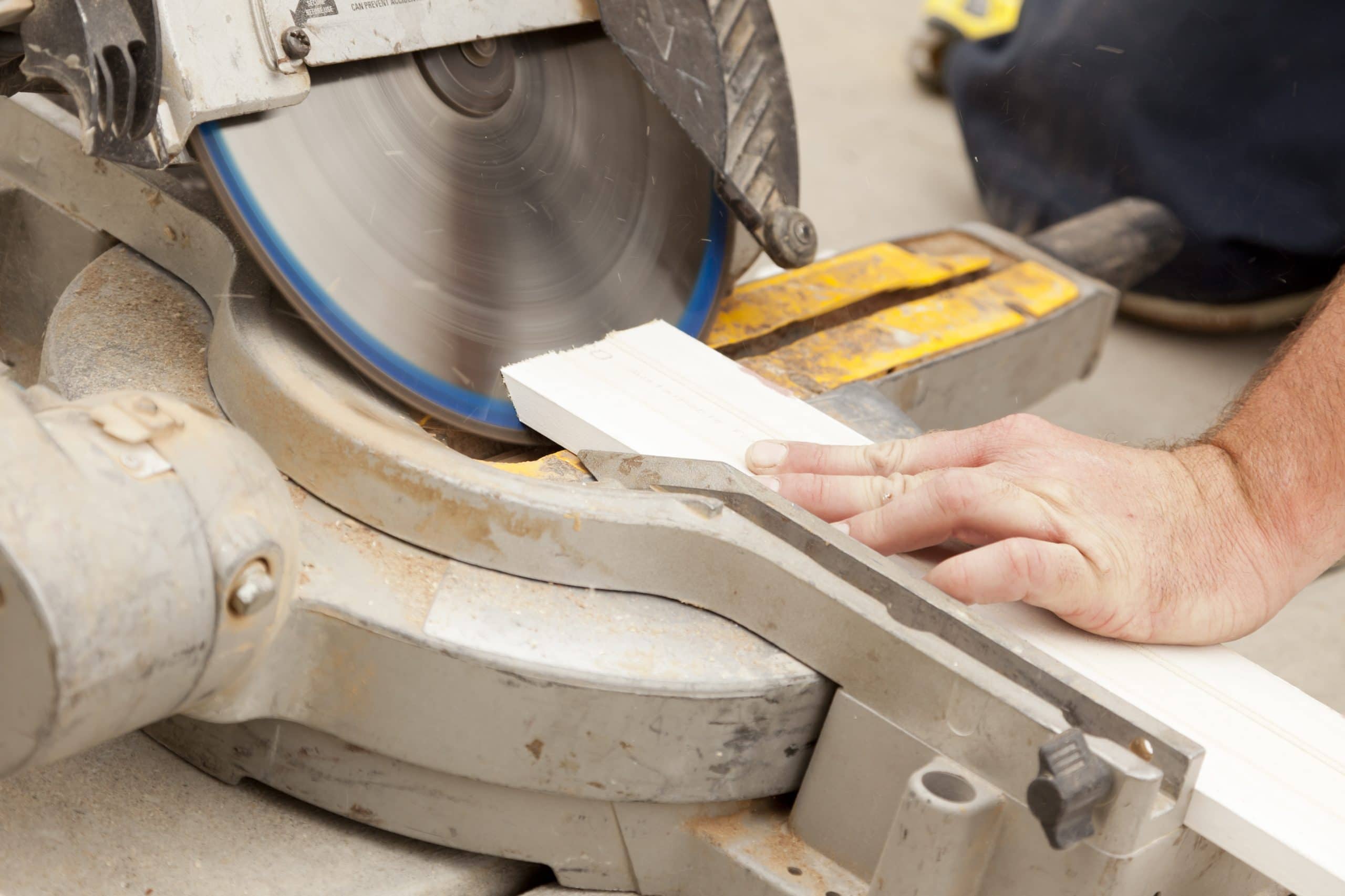 Some people will use a miter saw for detailed trim work such as crown molding, because they can achieve more smooth corners with a mitered joint as opposed to a straight joint.  Miter saws are perfect for creating smooth, complex connections between pieces, whereas chop saws are best fitted for straight joints.

How to Use a Miter Saw

A miter saw functions very similarly to a chop saw. The initial actions are the same – you place a piece of wood on the chock and ensure that you have it lined up to be cut in the proper place. However, from there, several steps are different.

You must know ahead of time what angles are needed, and this involves some detailed work. Whether you’re working from a plan or measuring and cutting as you go, you’ll need to work out the exact angle for your cut.

Using a lever on the side of the saw, you can rotate the blade to the appropriate angle so that it will attack properly. There is also an option to lock the blade in place on most of these tools, so make sure that it is locked and will not slip. 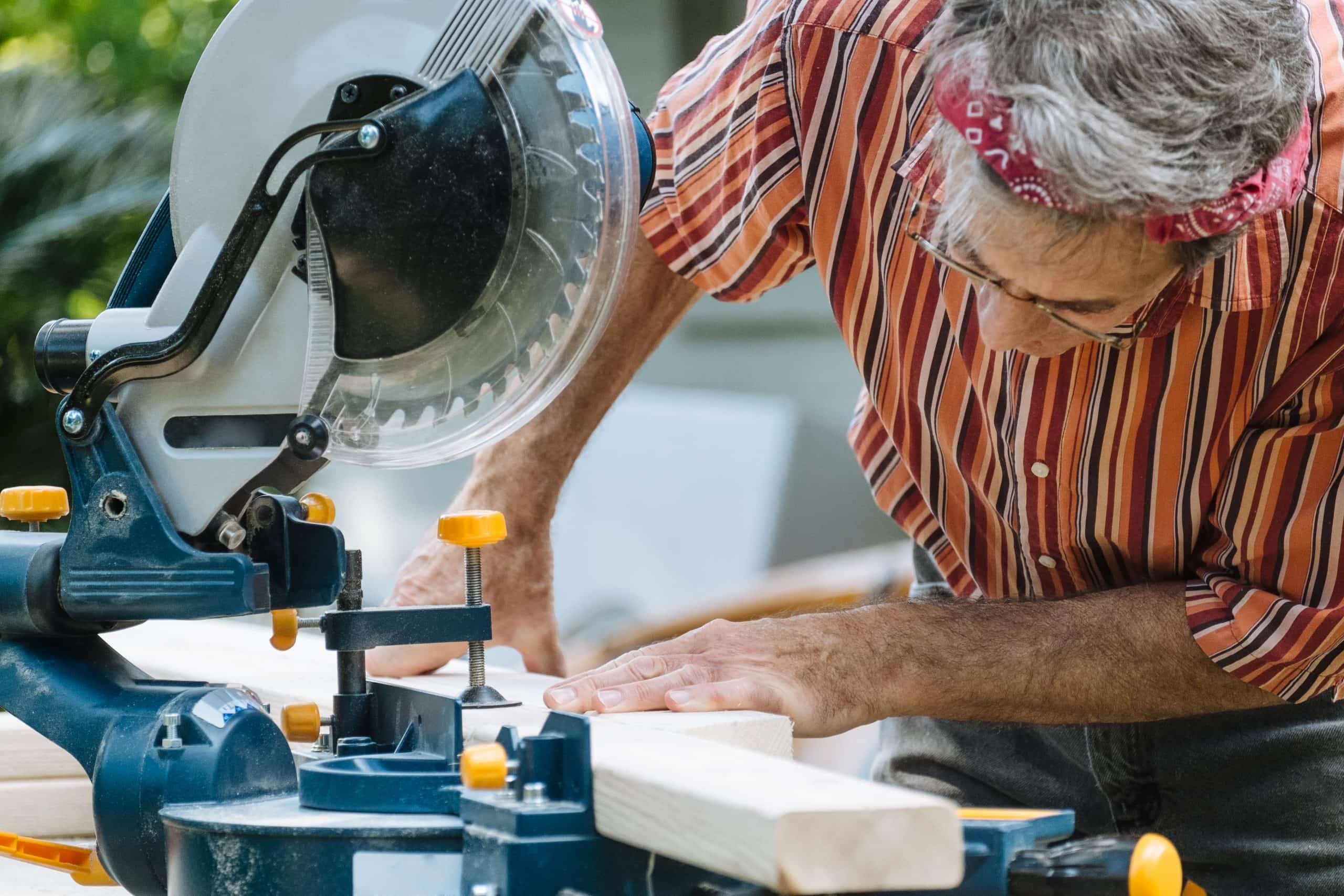 If you are mitering in multiple axes, there is another lever that will let you rotate the entire cutting head to attack at a secondary angle.  Once again, you can lock the blade in place so that it will not move. Once you’ve done that, you can proceed as normal with cutting the wood.

The angles at which you set the head and blade, however, will limit the width of wood you can cut, meaning you won’t be able to work with as thick of pieces as you did with the chop saw.

Benefits, Features, and Safety of a Miter Saw

A miter clearly has some major benefits and flexibility compared to other saws. In fact, miter saws are more popular in many circles than circular saws and even table saws, because of their versatility. The ability to do such complex angles and cuts gives miter saws a real advantage for detailed woodworking.

In addition to the complex angles, many miter saws offer laser sights to ensure that you are cutting in the correct spot each time. To improve the size capabilities of these saws, many higher end saws have incorporated a sliding function that extends the range of the miter saw, making it a bit more comparable to chop saws in capacity.

Finally, miter saws have all the standard safety features such as guards and kill switches to prevent improper use and close calls. Again proper training is important before use.

Chop saws and miter saws are both excellent tools, with different purposes. The problem is, they frequently get mistaken for one another because they look alike. The intended functions, however, are very different, and when they are used properly, they are very different tools.

If you’re trying to decide between purchasing a chop saws and buying a miter saw, you need to know what will be the best fit for the type of work you’re doing.

If you’re working mainly with handyman projects or construction and less complex woodworking designs, a chop saw is perfect for your workshop. However, if you intend to craft more detailed pieces of furniture and woodcraft, a miter saw will be a better fit, and it wouldn’t fit as well for the construction projects you may undertake. 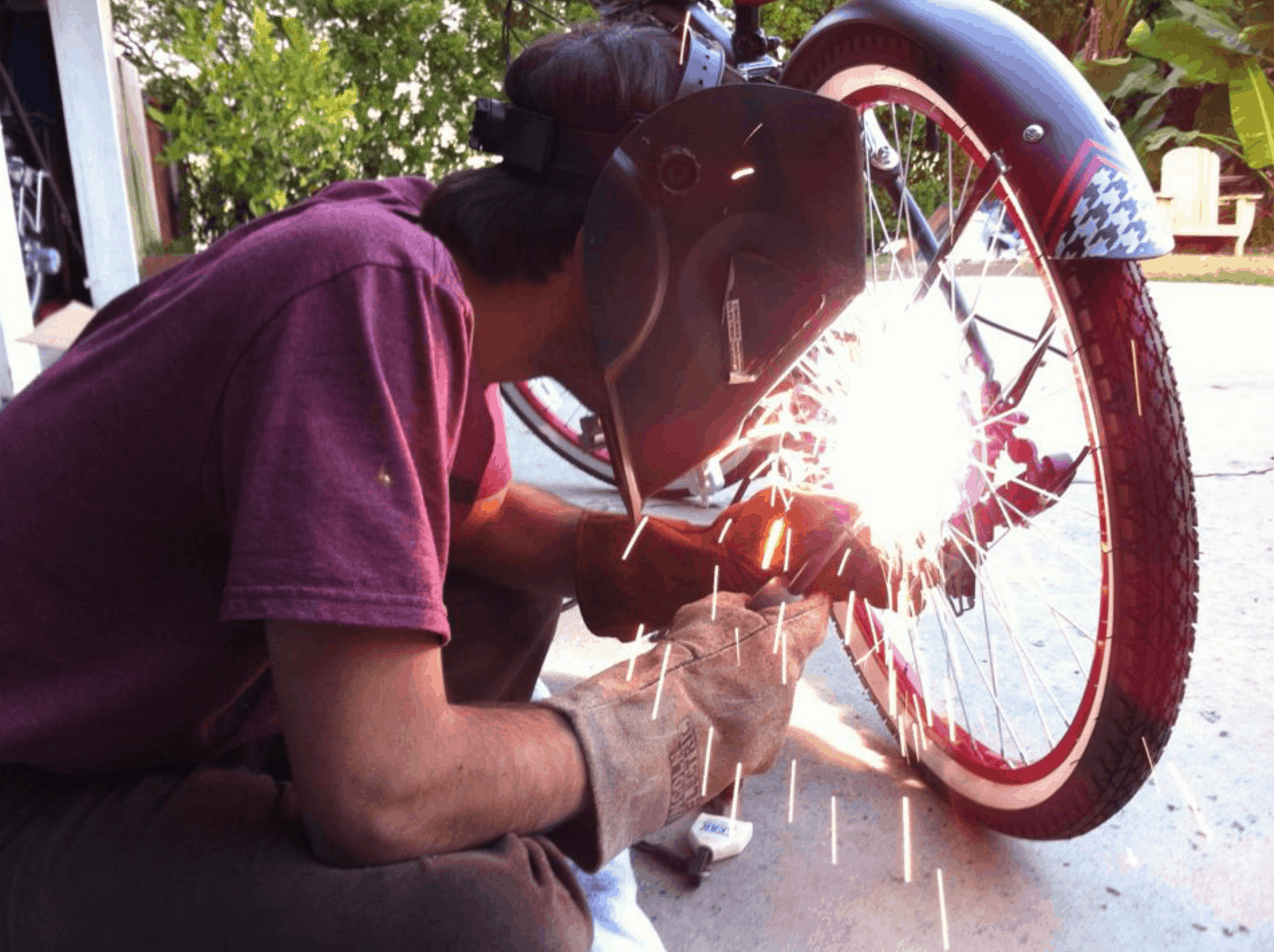 Zach is an avid outdoorsman and power tool enthusiast. His interest in tools led to the creation of "PowerTüls". When not working on this website, you can find Zach MIG welding, using lathes, and fabricating various items.